Letter from the Executive Director
By:  Heather Haeg

This spring we will have a temporary exhibit showcasing the lively and creative artwork of Edina native, Bill Manske. A force in the advertising world for decades and the creator of iconic figures such as the Insty prints Wizard; Bill was also an accomplished and prolific artist We are fortunate to have a chance to gather his work in our museum space. The show will be curated by his children and will feature dozens of original pieces. Please follow us on Instagram, Twitter and Facebook for progress updates and info regarding the opening of this unique exhibit at EHS.

We are also gearing up for our upcoming exhibit, slated for fall 2020, on the history of Edina Schools. We are in the process of gathering relevant objects beyond what we have in our collection.
​
We are particularly interested in a mascot costume and rare items from schools that have closed. We would love to hear from faculty, coaches and anyone else with a unique item for loan or donation. Please contact curator Stephen Barrett curator@edinahistoricalsociety.org.

We need your help! We rely on volunteers for all kind of projects and ongoing needs at the museum. Please lend a hand and get to know your local historical society better. Please contact us for details museum@edinahistoricalsociety.org 612.928.4577.
Know a recent college grad who would love a chance to gain real-world work experience? Have them send their resume and cover letter to museum@edinahistoricalsociety.org. 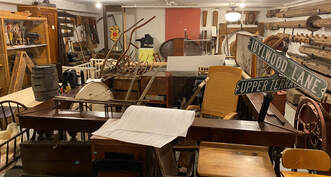 The Edina Historical Society was recently awarded a Legacy Grant by the Arts and Cultural Heritage Fund through the Minnesota Historical Society. This grant allows EHS to hire two full-time Curatorial Assistants to help complete the inventory of the museum’s collection, scheduled for completion in 2020.
​
We are very excited about our upcoming April 2020 exhibit, showcasing the life and art of longtime Edina resident Bill Manske. The exhibit opens on April 16 and features paintings, advertisements and personal items from Bill’s personal collection as a lifelong artist.

In September, the Edina Historical Society will be opening an exhibit that explores the history of schools in Edina. It will feature photographs, documents, and memorabilia from Edina East and Edina West High Schools as well as Edina-Morningside and various elementary schools. 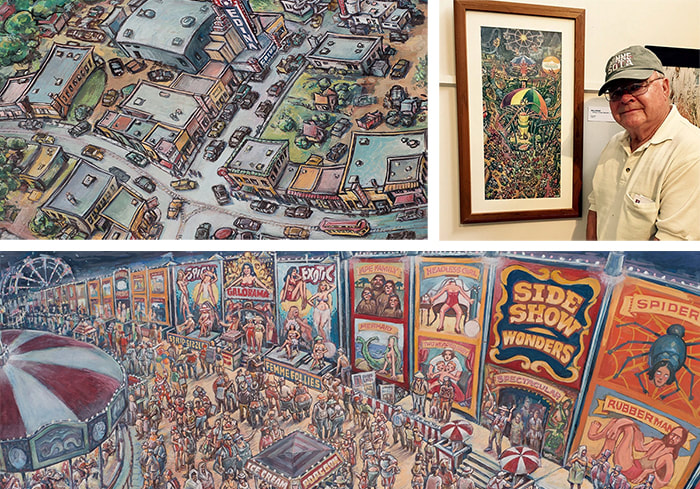 William (Bill) Manske is arguably one of Edina’s most famous artists. You are probably familiar with his work, although you may not have recognized his name.  The Minneapolis-born artist moved to Edina in the fifties and spent the rest of his life here, quietly creating a vast array of memorable characters for local advertisements. From the Insty Prints wizard logo to numerous local beers, his advertising art remains iconic to Twin Cities culture, but few have seen his more private collections of work.

Art claimed Manske as its own from the very start.  Growing up, Bill was filled with creativity, always busily drawing in class.  Seeing his talent and potential, one of his teachers entered some of his pieces into the nationwide Scholastic Art and Writing competition. After receiving three awards for his work and seeing the possibilities of channeling his passion into a career, Bill later received a scholarship and went on to pursue a degree at the Minneapolis School of Art, now Minneapolis College of Art and Design.

Shortly after graduating, Manske joined the Navy in 1952 and found a new outlet for his creative energy and cartooning skills aboard the USS Iowa.  “Sleeve Banyon” became a popular comic strip in the ship’s newspaper.  Manske’s character Sleeve represented the quintessential soldier, defeating the enemy in combat and finding romance.  It’s no wonder the comic strip became a favorite among crewmembers.  When Sleeve and Manske’s time in service came to an end, Bill returned home to Edina, working for numerous ad agencies in the metro area.

In terms of subject matter, Manske centered his work on people. His daughter Jill remembers him as a “keen observer of people,” and his art reflects this fascination with people watching.  His pieces brim with movement and energy, evoking the emotion of the moment, interactions between people and their various boisterous personalities.  His love for the Twin Cities and the people who call this place home shines through in his work.  His pieces document the changes he witnessed during his lifetime, from a piece that depicts the old 50th and France area to artworks that illustrate newer places like Nickelodeon Universe, as pictured with this article.

As he grew older and shifted from advertising art to teaching classes at Hennepin Technical College, Manske began to explore with different mediums.  Art remained a passion for him and a means to exercise his insatiable curiosity.  If something caught his attention, Bill was quick to jump on the idea and enjoyed the challenge of piecing together how things function.  “He couldn’t not be creative,” recalls Jill Manske, even channeling his artistic nature into other aspects of life, such as decorating the yard for Christmas.  The family’s favorite artist, Bill did caricatures at his grandchildren’s grad parties, as well as designing Christmas cards and even mugs for the Edina High School gymnastics team.

An extremely private artist who seldom chose to display his work outside of the advertising field, it was not until Manske was into his eighties that he submitted his work to the Minnesota State Fair. That was the only time his work had been available for public viewing – until now!  The Edina Historical Society has the immense privilege of presenting a selection of William Manske’s work in our rotating exhibit gallery.  The exhibit opens on Thursday, April 16 and will be the first time Manske’s work has been exhibited in such a way and on such a scale; you do not want to miss out on this rare opportunity!

A Tale of Two High Schools
By:  Bob Thompson

Introduction and Part I

Prior to 1949, Edina students were scattered among at least half a dozen high schools. Most attended Central, West and Southwest in Minneapolis, while others enrolled in St. Louis Park or at private schools such as DeLaSalle, Norththrop and Blake.

Edina residents began talking about the need to build their own high school after Minneapolis raised the tuition for non-residents in 1941. With the Great Recession barely over and war clouds on the horizon, a referendum to build a high school in Edina was voted down.

With the end of World War II and a baby boom getting underway, Edina was now ready for its own high school. Two sites were considered, including a parcel along Wooddale which could be purchased from the Edina Country Club. That location would put the school in the oldest part of Edina. The site eventually chosen was at 56th and Normandale (Highway 100), closer to the center of Edina’s anticipated post-war residential growth.

A $1.25 million bond issue was approved by voters in 1946 with ground breaking ceremonies held in 1947. Classes started in 1949 with 214 students. Students selected the Hornets as their mascot and Green and White for school colors. By 1952, there were 432 students, and a graduating class of 122.

When a second high school was opened in 1972, it was named Edina West and the original campus was renamed Edina East. As enrollments from the older east side neighborhoods declined, Edina East was closed in 1981. Classes were consolidated at the west campus while the original building became a multi-purpose community center.

In 1957, a drug called Enovid, officially approved for gynecological disorders, was introduced. The drug also prevented pregnancy, and Enovid was being used unofficially as a contraceptive through “off label” prescribing. In 1960, the Food and Drug Administration approved Enovid as America’s first legal contraceptive.

While some states tried to outlaw contraception, the Supreme Court ruled in 1965 that use of “the pill” by married couples was protected under the right to privacy. Soon after, birth rates and the average size of families began dropping. There was a slight change in this decline during the late 1970s, when a baby boom echo appeared as the daughters and sons of baby boomers started their own families. Births increased, but the birth rate was now 30% below the 1950s peak.

For fifty years the school board dealt with an enrollment roller coaster. The earliest baby boom kids were arriving at elementary schools in the early 1950s. High school enrollments peaked in the mid-1970s and started falling, never to return to previous highs.

Staggering Growth Through the 1960s

By 1970, Edina High School was grappling with an enrollment more than seven times that of 1950. Hallways and stairways were crowded, classroom space was strained and students shared lockers.

Staggered start times were considered too disruptive, so other measures were taken. Auditorium seating and lighting were modified to handle study hall requirements. Temporary buildings housed French classes and physical education stations. One study hall was split into two classrooms while three activity rooms under the girl’s gym became classrooms.

It was evident that the high school had to be expanded or a second high school built. Discussion soon shifted to the advantages of a second school. School board members and parents talked about closer identification with two smaller schools, more interactions among students and staff, expanded opportunities for sports and extra-curricular activities.

But would taxpayers be willing to support the cost of an additional high school? The U.S. was sagging under a devastating mix of unemployment, inflation and recession, a phenomenon called stagflation. Edina families and businesses were struggling too. High interest rates and uncertain job prospects discouraged home purchases by young families. Turnover of existing homes fell and only 69 residential construction permits were issued in 1970, while 299 permits had been issued only a couple years earlier.

Enrollment in elementary schools was falling, though the secondary enrollment pipeline still flowed with 117 more students registered for fall 1970. The board was convinced that near-term factors would have no long-term effect. The economy would improve and enrollment would fall back into line. A special election to approve a new high school and add elementary school capacity was set for October 20, 1970.

Edina Gets Its Second High School

School district administrators believed voters would support a referendum for a second high school if the question was clearly framed as a better educational experience for everyone, not as more space. The west side of Edina was still growing and families there were expected to provide the needed votes for a second high school.

A $20.42 million referendum in December 1969 had failed. The board and administrators knew they had to develop support for a revised referendum scheduled for October 1970. Public meetings were held to talk about unacceptable options -- one high school with staggered start times or the possibility of year-round classes were discussed. A telephone hot line was set up to address concerns. Full page ads ran in the Edina Sun newspaper and Get-out-the-vote campaigns were organized.

Voters were asked: Do you approve $9.255 million for a second high school and $695,000 to acquire another elementary site and expand Cornelia School? The vote was 6,392 Yes and 5,673 No votes for the high school -- 53% approved while 47% opposed. The elementary school proposals failed in every precinct.

West side precincts did deliver the winning margin for a second high school but in the three precincts with the strongest support, more than a third of voters were opposed. Construction started 6 months later in May 1971 and Edina West High School opened in fall 1972.

In our next issue, Part II of the Tale of Two Schools will describe the era of two high schools and the succumbing of Edina’s first high school to the baby bust and hard times of the 1970s as well as the accomplishments of Edina High School since consolidation.
​

Calling all local historians, we are looking for volunteers who love Edina history to help us research and write articles about Edina’s rich history for our newsletter and Facebook posts.  To learn more, contact heather@edinahistoricalsociety.org.