Letter from the Executive Director
By:  Heather Haeg

This Fall we have had some excellent programs and will soon be wrapping up the 2019 calendar with “100 Years of Christmas at Dayton’s” presented by James Neaghbor. This program is already SOLD OUT! Due to the popularity of this annual event, we plan to have both an evening and a daytime program next year. Keep an eye on our website www.edinahistoricalsociety.org for a calendar of events to be released shortly.

In September we had a wonderful evening of laughs and whiskey tasting with Kieran Folliard. His stories are always entertaining and filled with endless stories of Ireland, restaurants, distilling success and mishaps. We hope to have him return in 2020 with even more tales of his life from the Emerald Isle to the Twin Cities.  Cahill Cream Ale was released by Wooden Hill Brewery in November to rave reviews. It is available for purchase at Wooden Hill and Edina Liquor. Try it!

We are in need of a Social Media Intern. If you know a recent college graduate who is looking to gain experience, please send him/her our way. Our intern program offers an opportunity to hone skills in a work environment and build a professional resume. Our current intern, Claire Nelson, is a graduate of Carleton College and has worked on a variety of projects including research for our new exhibit, marketing Cahill field trips and writing a monthly column for Country Club Magazine. She has been learning collections from Curator Stephen Barrett and was instrumental in the installation of our newest exhibit. Thank you, Claire!

Finally, it is that time of year. Our membership drive is in full swing and WE NEED YOUR HELP. We are an independent 501 C3 and rely on your generous support to complete our mission. We are stewards of a vast collection of photographs which tell the history of Edina, we house over 15,0000 artifacts which have been donated to EHS and we provide the resources and space for residents to research the history of their home. We sincerely hope you will renew your membership and consider us in planning your year-end giving. 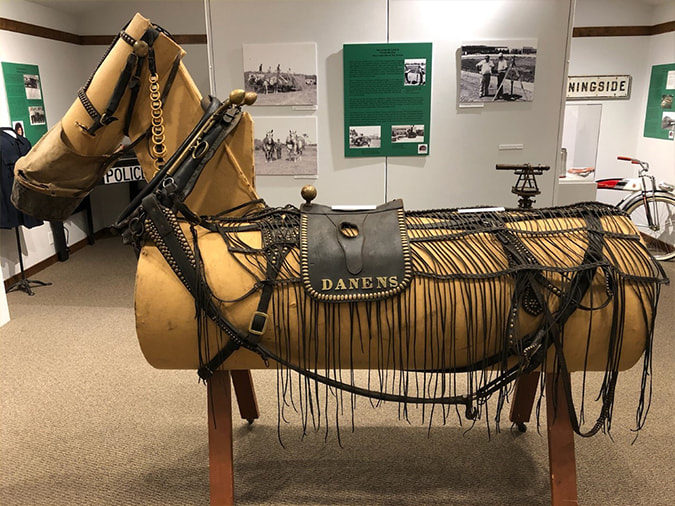 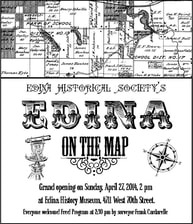 2019 is a very special year for the Edina Historical Society as we celebrate the 50th anniversary of our museum. To commemorate this occasion, we put together an exhibit that highlights some of the interesting artifacts we have collected over the past 50 years. The exhibit took more than two months to complete as Claire Jensen (our intern) and I researched the collection, assembled all the artifacts and then wrote the stories that comprise the exhibit.

All of these items help to tell a story about the city of Edina and the history of our Edina Historical Society. Some of the pieces on display include an original set of police lights used by the Edina Police Department, as well as items that highlight Edina’s sports history and the city’s 1988 Centennial Celebration. Be sure to see the original blueprint for the Dayton’s sign on the side of Southdale Shopping Center and the original collage of the museum’s founding Board of Directors. You may even recognize the original movie theater seats! But one of the most intriguing artifacts on display is an original horse tack used by the Danens family in the 1930s. This interactive display still has its original leather and is nearly 100 years old.

Many of the articles on display have never before been displayed to the public, and some have not seen the light of day for decades. I am personally very proud of this 50th anniversary exhibit and we look forward to meeting you when you visit – we know you’ll enjoy seeing the stories that illustrate our history!

Edina's Got Talent:  Music and Arts at Edina High School
By:  Bob Thompson 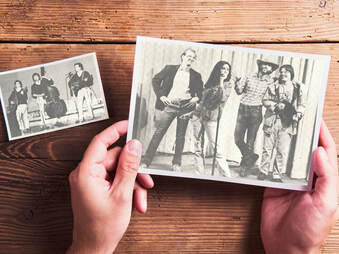 Excellence in musical performances, dramatic productions, and journalism is part of the history of Edina High School. The arts at EHS are as vital as academics and sports.

Talented students, accomplished faculty and dedicated parents are supported by principals and teachers at the elementary and middle schools, and by superintendents and school board members.

Zephyrus, the EHS student-run news publication, reported in 2003 that school letters would be awarded to students for accomplishments in activities beyond varsity sports, including band, orchestra, choir, speech, math, quiz bowl and community service. For musical activities, students can earn points toward a letter by pursuing enrichment activities such as participation in school musicals and performing in solo or group numbers.

These awards highlight some of EHS’s many accomplishments in music, arts and journalism. Two examples, Pops Concert and Current Jam, illustrate how talent is developed at EHS.

The first Pops Concert musicians took the stage just five years after the 1949 opening of the original Edina High School. That one-night show, under the direction of the newly hired band director, Butler Eitel, drew about 250. By the early ’60’s, the Pops was drawing 3,000 people in three performances. A five-night schedule was adopted in the late ’60’s.

The Pops evolved into a medley of challenging musical numbers with student-created skits and sight gags as well as hits from selected Broadway musicals.

Students perform a wide selection of musical styles ranging from major works to pop music, light novelty music, jazz, and everything in between. Band students announce all numbers, sing all the vocal parts, perform all the dances and skits and collaborate on the overall theme of the concert. (excerpt from Edina Patch, February 23, 2013)

A former Pops member remembered his time with the group:

Band is special because it has so many people with different backgrounds and interests participate. There are athletes, people on debate team — lots of people brought together. Band gives kids an immediate home and a place to find common ground. Music is special in that way because it builds community. Sure there’s competition. But it always boils down to supporting everyone in their musical pursuits and being better together. Music makes connections. (excerpt from Edina Band website)

The Silver Anniversary show was held April 1978. In recognition of the successes of the Pops Concerts, the Edina School Board passed a resolution congratulating the Edina East Concert Band for 25 years of Pops Concerts and excellent musicianship. Pops had started at the original Edina High School (renamed Edina East in 1972) and continued when East and West were consolidated at the Valley View campus in 1981.

At the time of the Silver Anniversary, Edina East’s yearbook, the Whigrean, described the preparations required for the annual Pops Concerts:

Tryouts began before Christmas with parts being cast on the basis of singing ability and personality. Weeks of rehearsals followed, held three or four nights a week for four to six hours. Band members choreographed the numbers, parents helped with set construction, and costumes were bought, made, borrowed or rented.

Current Jam is the Concert Choir’s iconic spring concert. Filled with singing and dancing, Current Jam has been a “go to event” each spring for more than 45 years, showcasing the talents of students performing arrangements of popular tunes. Much of the show is created and produced by the Concert Choir members. As with the Pops, Current Jam shows are fully funded by ticket sales and fundraising by students and parents.

Current Jam ’77 was the first year with Bob Peterson at the helm. Peterson, who had years of professional experience in musical theater, emphasized stage technology and sophisticated choreography in the productions. The use of video projections and stage lighting became core to the shows. The senior class video was introduced in 1977 with the choir singing “Times of Our Lives” at the close of each performance.

Current Jam ’99 was the under the leadership of Dave Henderson, who had worked with Bob Peterson on previous Current Jams. Dave had sung professionally in New York City and was a member of Vocal Essence, one of the world’s premier choral music groups. Under Dave’s leadership, Current Jam continued to evolve, giving choir members new opportunities to create a show with high professional standards.

Current Jam features the choir accompanied by the “CJ Backup Band” along with professionally choreographed dance numbers. Over the past 45 years, only three professional choreographers have worked with Current Jam. Choreography focused on designing dance moves that work onstage for dancers and non-dancers. (Material from interviews and excerpts from the Edina Choir website.)

Rollie Ring, a long-time teacher principal at EHS and Dave Henderson, long-time EHS choir director, stressed the role of parents in the success of Edina’s music and arts programs:

In all the arts programs, the parents had a huge influence on the quality of the programs. They got students to rehearsals, built sets for shows and concerts, helped with fund raising that enhanced the programs, provided private lessons, brought in treats for all-day rehearsals, created and fitted costumes and more. Their countless hours behind the scenes allowed directors and students to focus on doing their best. (Dave Henderson, personal communication)

Calling all local historians, we are looking for volunteers who love Edina history to help us research and write articles about Edina’s rich history for our newsletter and Facebook posts.  To learn more, contact heather@edinahistoricalsociety.org.